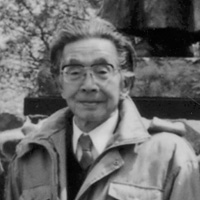 During World War II he served as staff photographer in the Publications Division, Asahi Shimbun Tokyo Head Office. covering the firebombing of several Japanese cities. After the war ended, the newspaper decided to print a special edition on the atomic bombing in its magazine Scientific Asahi.  An Asahi reporter and Matsumoto went to Hiroshima and Nagasaki to take photos,  He photographed Nagasaki from August 25th to September 15th, 1945 and Hiroshima from September 18th to 25th. Matsumoto’s photographs were subject to media constraints on showing graphic images of the human casualties. One photo of a grave site taken by Matsumoto led to the prefecture digging for and finding human remains in Shukkeien Garden in July 1987. Of the photos he took of Hiroshima, the Asahi Shimbun still possesses 157.