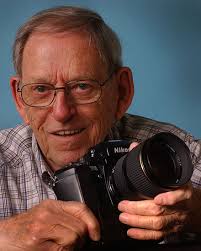 James Edward Westcott (1922 – 2019) was a  U.S. Army Corps of Engineers photographer who documented the construction, and operation of the Oak Ridge reactor in Tennessee during the Manhattan Project. Some of his images were among the photos that were distributed to news media with the announcement of the first atomic bomb. He also photographed Manhattan Project scientists, military generals, U.S. presidents and senators. He recorded civilian activities in Oak Ridge for the military newspaper and photographed nuclear power stations all over the United States.