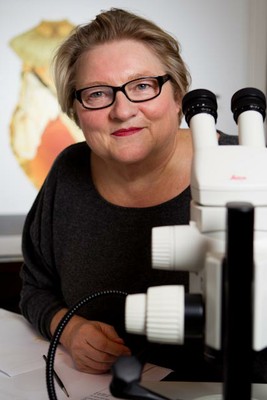 Cornelia Hesse-Honegger (1944 – ) is a Swiss Scientific illustrator and visual  “knowledge artist”. Your insect -Pictures been exhibited internationally in museums and galleries and blurs the border between art and science,  presenting insects as a testimony to a beautiful and threatened world of life.

Field studies in the nuclear fallout areas from Chernobyl

As a scientific illustrator I had worked for Prof. Hans Burla, a geneticist at the Zoological Institute of the University of Zurich. In 1967 he gave me the assignment to draw Drosophila subobscura flies that had been mutated in the laboratory by adding a poison (EMS) to their food. For my own interest I also painted these mutated flies, which were called quasimodo.
In 1985 I painted a housefly, Musca domestica, mutation called aristapedia — mutated by x-rays in the laboratory. The dean of the Zoological Institute gave the mutant flies to me when I asked him for permission to paint them. This work trained me to detect morphological disturbances in Heteroptera true bugs, which live in the wild at the edge of forests and in meadows.

Field studies in radiation-contaminated areas in the U.S.

After having found deformed insects in the fallout areas of Chernobyl and nuclear facilities in Switzerland and other parts of Europe, I grew interested in the question, Are there long-lasting consequences for the morphological health of Heteroptera leaf bugs after a nuclear accident?
It was once thought that the nuclear power plants in Eastern Europe were not as safe as in the West. Therefore, I wanted to concentrate my efforts on Western nuclear power plants. The first plant that came into consideration: Three Mile Island, in Pennsylvania, where in 1979 a nuclear accident took place.

Field study in the environs of Swiss nuclear power plants

The Swiss “Commission for the Protection from Radioactivity” estimated in 1988 that as a result of the radioactive fallout from Chernobyl, the Swiss population would have 2 to 22 additional genetical anomalies for the next 100 years, and an additional 300 cases of cancer for the next 70 years.
[ 1 ] In other words, the threat from the Chernobyl radioactive cloud was negligible.

My first collecting tour around the nuclear power plant Gösgen, in the canton of Aargau, alerted me to the possibility that terrible findings awaited me, as the deformities I detected with my binocular microscope were comparable to, and even worse than the ones I had found in Sweden and in the Ticino, fallout areas of the Chernobyl radioactive cloud. [ 2 ]