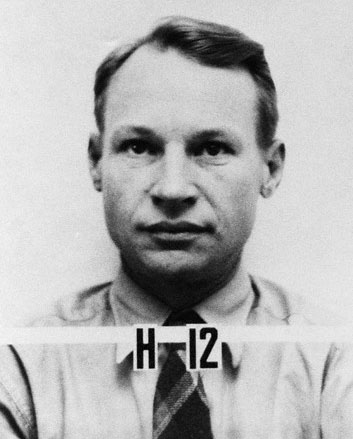 Berlyn Brixner (1911-2009)  was the head photographer for the Trinity test, the first detonation of a nuclear weapon on July 16, 1945. Brixner was positioned 10,000 yards (9,100 m) away from the explosion and had 50 cameras of varying speeds running from different locations to capture the shot in full motion.

Brixner was assigned to shoot movies in 16-millimeter black-and-white film, from every angle and distance and at every available speed, of an unknown event beginning with the brightest flash ever produced on Earth. “The theoretical people had calculated a some 10-sun brightness. So that was easy,” said Brixner. “All I had to do was go out and point my camera at the sun and take some pictures. Ten times that was easy to calculate.”

At ignition, Brixner remembers “The whole filter seemed to light up as bright as the sun. I was temporarily blinded. I looked to the side. The Oscura mountains were as bright as day. I saw this tremendous ball of fire, and it was rising. I was just spellbound! I followed it as it rose. Then it dawned on me. I’m the photographer! I’ve gotta get that ball of fire.” He jogged the camera up. He said: “There was no sound! It all took place in absolute silence.