From Trinity to Hiroshima and Beyond: the Nuclear Age Through the Eyes of the Atomic Photographers Guild 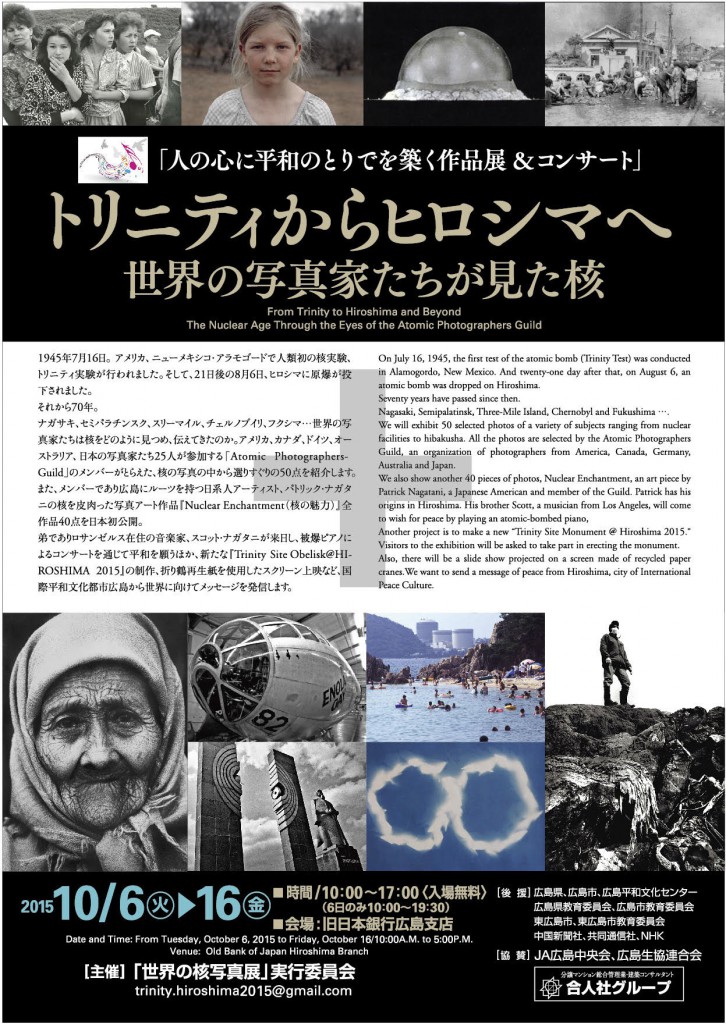 On July 16, 1945, the first test of the atomic bomb (Trinity Test) was conducted in Alamogordo, New Mexico. Twenty-one days after that on August 6th, an atomic bomb was dropped on Hiroshima. Seventy years has passed since then.

From October 6-16, the Atomic Photographers Guild will have an exhibition in the Hiroshima Bank Building, a robust building in the hypo-center that survived the a-bomb. The Bank is now an Arts Center with minimal funding.

We will exhibit 50 selected photos of a variety of subjects ranging from nuclear facilities to Hibakusha. All the photos are selected by the APG, an organisation of photographers from America, Canada, Germany, Australia and Japan.

We also show another 40 works called Nuclear Enchantment by Patrick Nagatani, a Japanaese American and member of the Guild. Patrick has his origins in Hiroshima. His brother Scott, a musician from Los Angeles, will come to wish for peace by playing an atomic-bombed piano.

Another project is to make a new “Trinity Site Monument @ Hiroshima 2015” – visitors to the exhibition will be asked to take part in erecting the monument. Also, there will be a slide show projected on a screen made of recycled paper cranes. We want to send a message of peace from Hiroshima, city of International Peace Culture.